In a recent publication, the performance of eighteen co-operative banking groups in thirteen European countries is investigated and compared to that of the entire banking sector in the same countries.[1]

It is acknowledged that the performance of any co-operative bank cannot be assessed by looking solely at quantitative indicators or hard data. Besides, the concept of ‘performance’ has many dimensions: the degree of customer satisfaction, customers’ perception that the bank acts in their interests, the access offered to networks and knowledge of the bank, the stability/duration of relationships, the perceived attention/concern for the environment and local communities, et cetera.

The external environment poses many challenges for all banks. The European economy shows signs of recovery, but many uncertainties remain. Furthermore, the business model of retail banks, and co-operative banks in particular, has been upended by the monetary authorities’ decision to drop interest rates to historic lows and into negative territory. Increasing regulatory costs and competition from incumbent and new players put additional pressure on net profits.

The relatively large number of co-operative banks’ branches does not lead to structurally higher cost to income ratios. On the contrary, their average efficiency levels were alternately higher or lower than those of entire banking sectors since 2011. In 2015, the cost-income ratios were actually very close and considerably lower than a few years earlier. Co-operative banks realised cost-efficiency gains as a result of continued consolidation in the sector, i.e. mergers between local banks, headcount reductions and virtualisation.

Indexing balance sheet data at 100 in 2011, one can observe clear dispersions between co-operative banks and the entire banking industry. Since 2011, total assets and retail loans of all other banks contracted, whereas they grew at co-operative banks. Moreover, the deposit expansion (10 per cent) of all other banks catches the eye. This reflects their strategic shift towards greater reliance on retail funding in recent years.

Over a longer term horizon, co-operative banks have on average outperformed all other banks in terms of Return on Equity (see Figure). The ROE of co-operative banks also exhibits a more stable pattern over a longer time period. This might be due to the fact that co-operative banks are more involved in retail banking, which is normally associated with limited volatility in revenues. Overall profitability improved particularly for all other banks in recent years. The average ROE of both clusters of banks equalled 6% in 2015. The profitability prospects for banks remain bleak, though. Finally, bank capital positions improved further, helped by both capital increases and risk weighed asset declines. 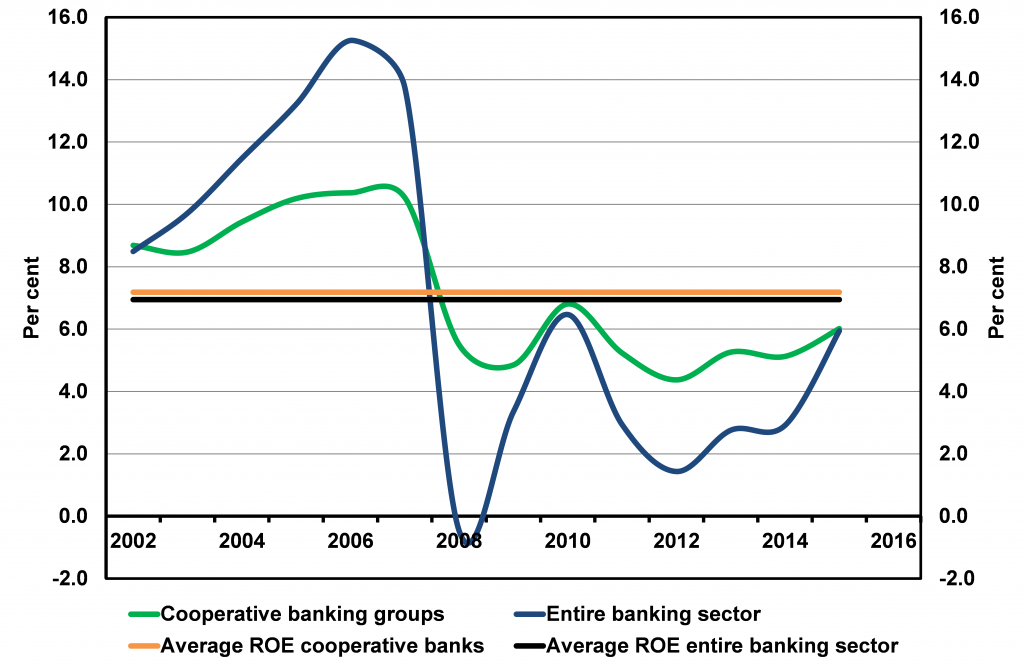 Source: calculations by TIAS based on data from co-operative banking groups, national supervisory authorities, the ECB, and World Bank.
Note: The orange and black lines represent the average return on equity of respectively co-operative banks and the entire banking sector over the time span 2002-2015.

Viewed over a longer time span, co-operative banking groups have always stood out from entire banking systems regarding many financial metrics. However, we have observed considerable convergence in the indicators for both groups of banks in recent years. We think that regulatory forces are pushing banks in the same direction and/or prompt them to make similar choices, even though they have different ownership structures. This may have particular implications for financial stability, because enforced uniformity in banking (models) could eventually lead to financial fragility instead.

We argue that policy-makers and supervisors should refrain from measures that eventually yield a strong convergence of business models, governance structures and scale of banks. A marginalisation of biodiversity in banking will have a detrimental impact on competition and stability. It could also lead to negligence, or exclusion, of certain customer, business and/or economic segments in society. Recent history has learned that a kaleidoscopic banking sector lowers the risk of fierce market disruptions.

[1] This article is largely based on ‘Snapshot of European Co-operative Banking 2017’. 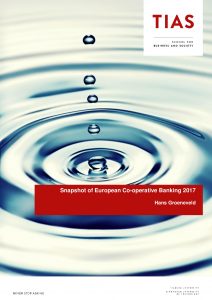