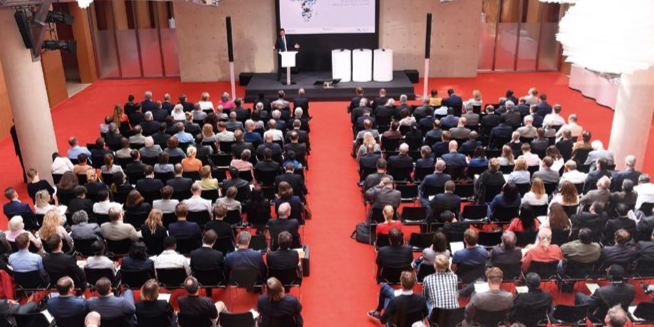 Almost 60 percent of the approximately 1.1 billion Africans currently live without access to electricity. And the need for it is increasing rapidly. By the year 2040, Africa’s energy demand will rise by about 80 percent. This demand is to be covered mainly by resources such as sun, wind and biomass. The African continent offers great potential in the field of renewable energies.

Berlin: On June 27, 2017, over 300 international guests discussed these potentials and challenges in the house of the DZ BANK in Berlin. In cooperation with the German Federal Ministry for Economic Cooperation and Development (BMZ), the DGRV held a conference on “New Energy for Africa. Cooperative – Decentralized – Renewable “. In addition to numerous practitioners from the renewable energy industry – including many energy cooperatives – and development cooperation organizations as well as representatives of research institutions, ministries and the media, some Bundestag representatives and the ambassadors from 13 African republics had followed the invitation.

Minister Müller presents the energy initiative of the BMZ

The congress was opened by the chairman of the board of the DGRV, Dr. Eckhard Ott. He emphasized that the approximately 850 energy cooperatives founded in Germany in the past ten years enabled a broad participation of the population in the energy turnaround. “In addition, they promote the regional economy and strengthen the acceptance of renewable energies. These benefits are also to be used in Africa. With its many years of experience in international development cooperation, the DGRV is a partner to support the initiation of community energy projects on the African continent,” said Ott.

Subsequently, the German Development Minister Dr. Gerd Müller presented the cornerstones of his “Green Community Energy for Africa” ​​initiative. He thus concretized the ideas for reforms to supply the African continent with energy, which had already been launched at the beginning of the year under his Marshall Plan for Africa. “Without energy no development, without development no jobs. Together with cooperatives, municipalities and the private sector, we bring solutions for a green energy supply to the rural regions of Africa,” said the minister. “This is how we contribute to a climate-friendly economic development and create sustainable perspectives for the people. Africa can be the first continent to be completely powered by renewable energies. ”

Cooperatives, municipalities and the private sector will play a major role in the implementation of these plans. The initiative aims to establish community energy partnerships, in which German citizens, cooperatives and local authorities can share their knowledge with African partners. In addition, over the next five years, the ministry intends to support the establishment of a legal and administrative framework for community energy cooperatives in eight selected African countries. A training initiative for energy professionals is planned as well.

A representative of the countries, which the BMZ initiative is focussing on, came to speak afterwards. Irene Muloni, Minister of Energy and Raw Materials of the East African Republic of Uganda, presented her plans for a green and decentralized energy future for her country. Although many energy projects have already been launched in recent years, Uganda still has about 80% of people without access to energy. The Minister therefore stressed her keen interest in an exchange with the German energy cooperatives and expressed her hope that they could help to provide all people in Uganda with energy in the coming years. “Let’s turn the dark continent into a green continent!”, she said to the congress guests.

How this call could become reality, was concretized by Dr. Christoph Beier, Member of the Board of the German Association for International Cooperation (GIZ) and Peter Pichler, consultant for development cooperation for the GaiaAfrica project. The latter reported on his experiences from Mozambique and stressed the great potential but also the challenges for community energy cooperatives in this region.

Talk of practitioners from Community Energy and Local Authorities

The first part of the program ended with an exciting round table. Under the heading “Cooperatives and Communes – Partners for Africa” discussed: Josef Göppel, CSU member of the Bundestag, Katharina Habersbrunner, member of the Board of Community Energy Cooperative BENG eG, Manuel de Araújo, mayor of the city of Quelimane in Mozambique, Günter Mögele, mayor of the Swabian city of Wilpoldsried (awarded with numerous national and international energy prices) and Serge Etoundi, solar entrepreneur from Cameroon.

In the afternoon, the conference participants were able to further develop their ideas for an energy dialogue with Africa in three parallel forums. The central question were: “What concrete contributions can energy cooperatives make to decentralized energy projects in Africa?”, “What are the basic conditions for a successful cooperation of communities, cooperatives and municipal enterprises?” and “What are the greatest potentials and  problems of a decentralized energy supply in developing countries? “.

At the end of the congress, all participants agreed: The enormous need of energy represents great challenges for Africa but also offers great opportunities to invest in green energy. Good legal framework conditions, an affordable technology as well as the know-how and the personal initiative of the local people are the key to success. Therefore, partnerships with German energy cooperatives can provide an important impetus.