The Idea and Practice of Cooperatives are Intangible Cultural Heritage 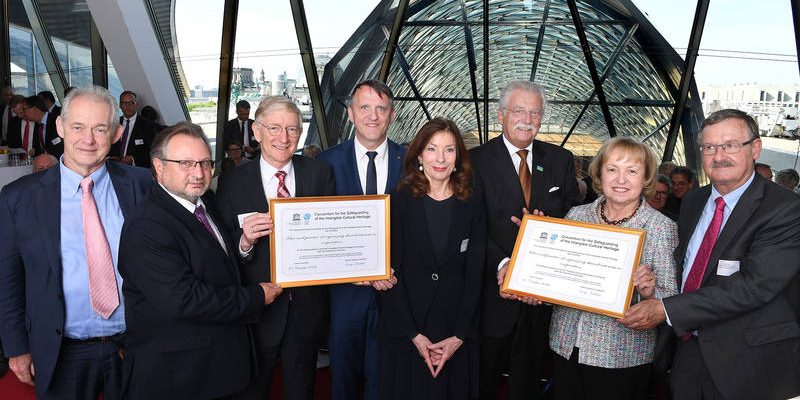 On 11th May 2017, Minister of State Maria Böhmer handed over the UNESCO diploma in recognition of the “Idea and Practice of the Organization of common Interests in Cooperatives” as Intangible Cultural Heritage to the German Hermann-Schulze-Delitzsch-Gesellschaft e. V. and the Friedrich-Wilhelm-Raiffeisen-Gesellschaft e. V. The two organizations were decisively involved in the nomination of Germany for the Representative List of UNESCO.

Minister of State Böhmer congratulated all the people involved in cooperatives in Germany for the recognition of their work as Intangible Cultural Heritage of Humanity. “The cultural form of the cooperative connects us with people all over the world. Around 800 million people in more than 100 countries are organized in cooperatives, thus contributing to the sustainable development of their region. Therefore, I can well imagine that the cooperatives in many countries are now inspired to join the first entry of Germany into the UNESCO list of Intangible Cultural Heritage.”

Prof. Dr. Christoph Wulf, Vice-President of the German Commission for UNESCO, pointed out the cultural importance of cooperatives bringing together people with different backgrounds, but common interests to achieve common goals: “I cordially congratulate all cooperatives in Germany to be honoured as Intangible Cultural Heritage of Humanity. They show how much our cultural heritage contributes to social development.”

Dr. Axel Viehweger, Chairman of the German Hermann-Schulze-Delitzsch-Gesellschaft e. V. emphasized: “In many educational institutions, hardly any knowledge about the cooperative is conveyed. We want to work on that. The cooperative has to be embedded much more in school and university education. UNESCO’s recognition will help us.”

Werner Böhnke, Chairman of the Deutsche Friedrich-Wilhelm-Raiffeisen-Gesellschaft e. V. added: “For us, the UNESCO award is a wonderful lead to the great anniversary year 2018. This year, Raiffeisen would have turned 200 years old. This event will give us again an opportunity to highlight the significance of the cooperative idea for the present and the future. Moreover, the recognition by UNESCO is an appreciation for all those who are involved in cooperatives around the world.”

Cooperatives are a form of social self-organization open to everyone, a model of cooperative self-help and self-responsibility. Globally, around 800 million cooperative members are active in more than 100 countries, of which 21 million are in Germany. The high number of cooperative members in Germany and the legal protection of their principles by a cooperative law are internationally extraordinary. On 30th November 2016, the cooperative idea and practice was incorporated into the International Representative List of the Intangible Cultural Heritage of Humanity.

The Intangible Cultural Heritage includes lively traditions from the sectors of dance, theater, music, oral traditions, rituals and customs, natural sciences and craftsmanship. Forms of Intangible Cultural Heritage are decisively based on human knowledge and skills. They are an expression of creativity and inventiveness, convey identity and continuity. They are passed on from generation to generation and are always redesigned

Since 2003, UNESCO supports the protection, documentation and preservation of these cultural forms. Individual elements from the national lists of the contracting states may be proposed for one of three UNESCO lists of Intangible Cultural Heritage. 429 customs, dramatics, craftsmanships and natural sciences from all over the world are currently listed, including the German cooperative idea and practice, the rumba of Cuba, traditional Chinese medicine and Italian violin making. To date, 172 countries have joined the UNESCO Convention on the Conservation of Intangible Cultural Heritage. Germany is a contracting state since 2013.

Next Podcast of Caja Popular Mexicana on Spotify
March 25, 2022